WBUR: While Others Wait, One Teen In Boston Is Granted Medical Deferred Action

December 13, 2019
In The News
By Shannon Dooling
WBUR: While Others Wait, One Teen In Boston Is Granted Medical Deferred Action

Months after federal immigration officials reinstated deferred action for medical cases, a family in Boston who feared they'd be removed from the U.S. — even as their son continued to need life-saving treatments — now has clarity.

Originally from Honduras, the Sanchez family came to Boston three years ago seeking proper health care for their 16-year-old son, Jonathan, who has cystic fibrosis. About three weeks ago, Jonathan, his mother and father received news that the government had approved their application for so-called medical deferred action.

It's a process that allows some non-citizens to stay in the U.S. to receive life-saving medical treatment that's not available in their home country. The Sanchez family was just one of dozens of families and individuals who still are awaiting government responses since WBUR uncovered in August that the process for seriously ill migrants was ended.

The Sanchez family entered the U.S. on tourist visas in 2016. After extending their visas for the maximum allowed time, the family's best option to remain in the country and continue Jonathan's care was to apply for medical deferred action.

"If they deny the program, then I need to go back to my country, and I'll probably die because in my country, there's no treatment for CF [cystic fibrosis]," Sanchez said in August, crying and trying to catch his breath. "Doctors don't even know what's the disease. The only ones who can help me are here in the United States."

Around that time, Jonathan Sanchez's family received a letter saying deferred action applications were no longer being processed. The letter said the family would need to leave the country within 33 days or face being placed in deportation proceedings.

Stories of other applicants receiving similar denial letters came in from across the country.

Massachusetts Congresswoman Ayanna Pressley was instrumental in helping reinstate the process after calling for a Congressional oversight hearing in September.

'We'll Be Able To Sleep'

Smiling, Jonathan's mother, Mariela Sanchez, remembered when her son first learned the family's application was approved. They all can now remain in the U.S. for two years without risk of deportation.

"When he first heard the news, he sighed and felt relieved and said, 'Oh great, now we'll be able to sleep,' " she said in Spanish.

Since then, Jonathan was admitted to the hospital for a bacterial infection. His mom said she's grateful to have at least a couple years to focus on his health.

"We are very happy because they heard us, and that they are helping us find a solution for our son in terms of health," she said. 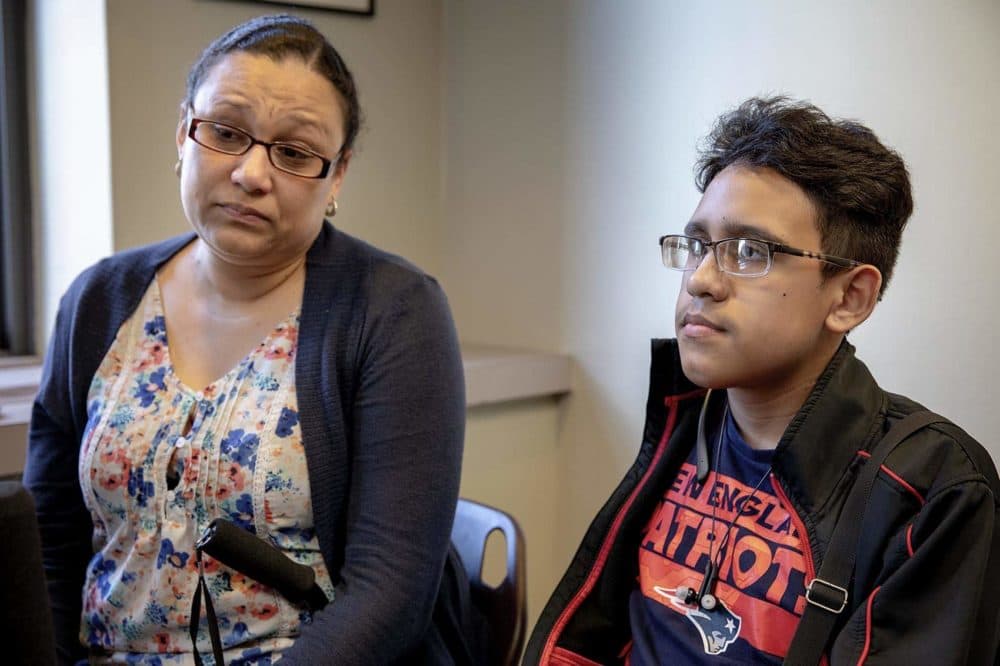 Jonathan Sanchez and his mother speak about his condition in an interview in August. (Robin Lubbock/WBUR)

Anthony Marino heads up legal services for the Irish International Immigrant Center (IIIC) in Boston. The Sanchez family's application is one of 19 the center filed for clients seeking deferred action because of medical needs.

"It's hard because we want to be positive — and I'd like to be optimistic," Marino said, "but we have seen so much from this government that makes us have to question what their actual motives are and whether or not they're being honest."

Three months after U.S. Citizenship and Immigration Services (USCIS) reinstated the process, Marino said the IIIC has received only two government responses, including the Sanchez family's. Both were approvals.

"Then we started receiving requests that we resubmit evidence that had already been submitted in several cases," he said. "There's so much that we don't know and so many reasons for us not to trust their motives that really, until we see final approvals for each of these families, we don't really know what's going on."

Officials with USCIS have repeatedly said there is no formal process or program for medical deferred action, but instead, these are simply individual applications submitted at local field offices.

Everyone with a pending application as of Aug. 7 has had their case re-opened and they'll be considered on a case-by-case basis, according to an agency spokesman. It's unclear whether or how new applications are being accepted.

In a statement, Pressley said she was relieved for the Sanchez family but remains skeptical of the Trump administration's intentions.

“The cruel and reckless actions of this administration that have threatened the ability of patients like Jonathan to receive life-saving medical care are simply unconscionable," she wrote. "I’m relieved that the Sanchez family is finally able to get the medical resources they need without fear of deportation, but I remain skeptical of this xenophobic administration that continues to stoke fear in Black and Brown people seeking refuge in America."

The IIIC has a lawsuit pending in Boston federal court, challenging the Trump administration's end of medical deferred action.